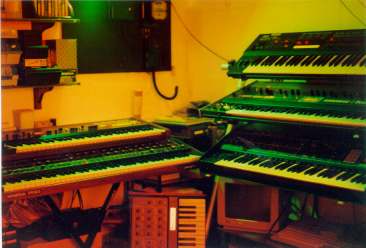 The Basement Studio is based several miles to the East of Manchester, England.

What makes this small home-based studio special? Why did Channel-4 come and film here? Perhaps the answers to these questions will soon become clear.

The Studio Today
The History of the Studio

Although privately run, the studio is arguably one of the best in the area for recording dance music. The studio also caters for many other styles of music and doesn't specialise in just one type. So far the only styles not recorded has been punk and country music. Before you ask, yes! we have recorded the odd classical piece and have even recorded a childrens school choir.

While recording the dance band 'Escape', the studio had media attention from Channel-4 Television. Although only brief, the filming here did lead to a follow-up call to the band with a record deal offer. Check out Escape's home page. 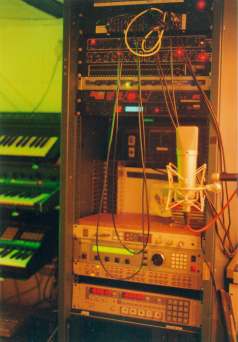 The studio centers around a Tascam 16-track 1" analogue tape machine together with 8-tracks of digital editing. The desk is an A&H Saber 32:16:2 which offers 54 channels of inputs at mixdown, most of which have 'mute' automation.

The effects rack as seen here, includes Drawmer gates and compressors, an Eventide H3000 harmonizer, PPG Waveterm-B, Akai CD3000 sampler, Midi and analogue patchbays, Reverbs by Korg, Proverb and Roland (including spring reverb for that 60's sound). There is also a 31 band graphic and Aphex enhancer although these very rarely get used now.

Microphones include Neumann U87, Sennheiser, Electrovoice and Shure.

There is even a Sony U-matic lo-band video machine and monitor for working to film.

Sequencing is by Cubase on the PC or Akai MPC60.

There are in house duplication facilities for cassettes although this is for small runs of less than 150 copies. If larger than this, outside duplication can be arranged. CD Mastering is now also available.

The equipment list includes many older analogue keyboards along with some of the more unique digital ones (i.e. the PPG).

The keyboards are as follows...